Why can't I play DVDs on Windows 8 Pro with Media Center Pack?

I have a laptop with Windows 8 Pro with Media Center (64 bit), but neither Media Player or Media Center can play DVDs.

Have I done something wrong? Did the Feature Pack not install correctly? Should this work?

Can I somehow uninstall and reinstall the Media Pack?

So I upgraded by Windows 7 Home Premium laptop to Windows 8 Pro based on Microsoft's low pricing. I also grabbed my free upgrade to Media Pack and followed the instructions on that page to add my feature pack.

Alas! I still cannot play DVDs via either Media Center or Player.

Thinking I might need to re-install the pack, I found that I could no longer add any more feature packs (searching for add features settings only shows Turn Windows Features On and Off). Media Centre and Media Player are both enabled in Windows Features. I cannot see any way to remove or downgrade from the Media Pack, nor to add any more feature packs.

I installed a codec pack (32bit) from Shark007, which has not allowed me to play DVDs (although did allow me to play various other media files).

VLC plays DVDs OK, but I'd prefer to figure out what the root cause of this problem is.

There were no errors or other indications that the Media Pack failed to install; the installation itself was quite smooth. Although I have not checked my event log in detail.

Before upgrading to Windows 7, I could play DVDs OK.

System Information, showing I have Windows 8 Pro with Media Center 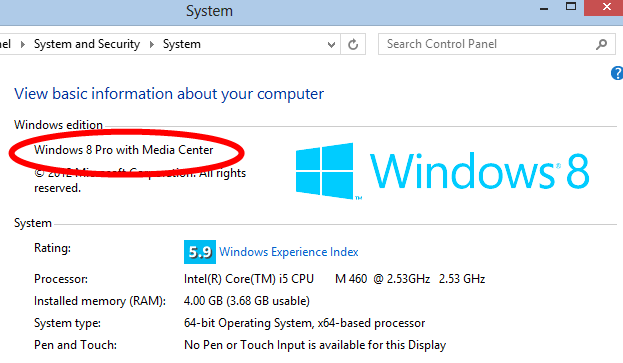 When playing a DVD, Media Player gives and error: The selected file has an extension that is not recognised by windows...

Media Center says: The file type is not recognisd and cannot be played, along with some codec related stuff.

I can browse the files OK via My Computer on any video DVD.