When declaring font-family: serif; I am seeing an old bitmapped serif font that I can't identify (see screenshot below) instead of the expected font Times New Roman. I know it's an old bitmapped font because it displays aliased, without any font smoothing, with IE7-10 on Win Vista-8 (just like Courier on every version of Win).

I would like to know (1) can anyone else confirm my research and (2) BONUS: which font is IE displaying?

Notes: IE6 and IE7 on Win XP displays Times New Roman, as they should. It doesn't matter if font-family: serif; is declared in an external stylesheet or inline on the element. Quoting the CSS attribute makes no difference. Adding "Unkown Font" to the stack also makes no difference.

New Screenshot: The answer from Jukka below is correct. Here is a new screenshot with Batang (not BatangChe) to illustrate. Hope this helps someone. 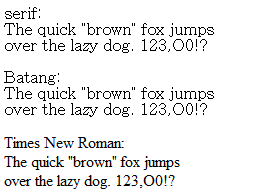